Who is Dubai’s Pepsi Girl?

For my commercial with Pepsi Arabia, the director Moneer Barakat wanted to depict who I really am, very ‘YallaNow’.

I, at first was a bit confused, I thought it was supposed to be mainstream and commercial. He said no, ‘I want it to be YOU’.

To do this we had to spend time having coffee’s, meeting up and of course I had to answer hundreds of questions, mostly personal.

I must admit, I dont find it easy to let people in, but Moneer is one of the best directors and most wonderful people I have ever met. After the Spanish inquisition, we had a script.

The next step was my home, my personal space. Everything had to be real.

On the shoot itself, I was so nervous I hadn’t slept the whole night before. AND  to top it off, they didnt put any make up on as I don’t tend to wear much in day to day life.. ‘Real’ it was! 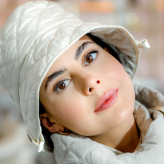